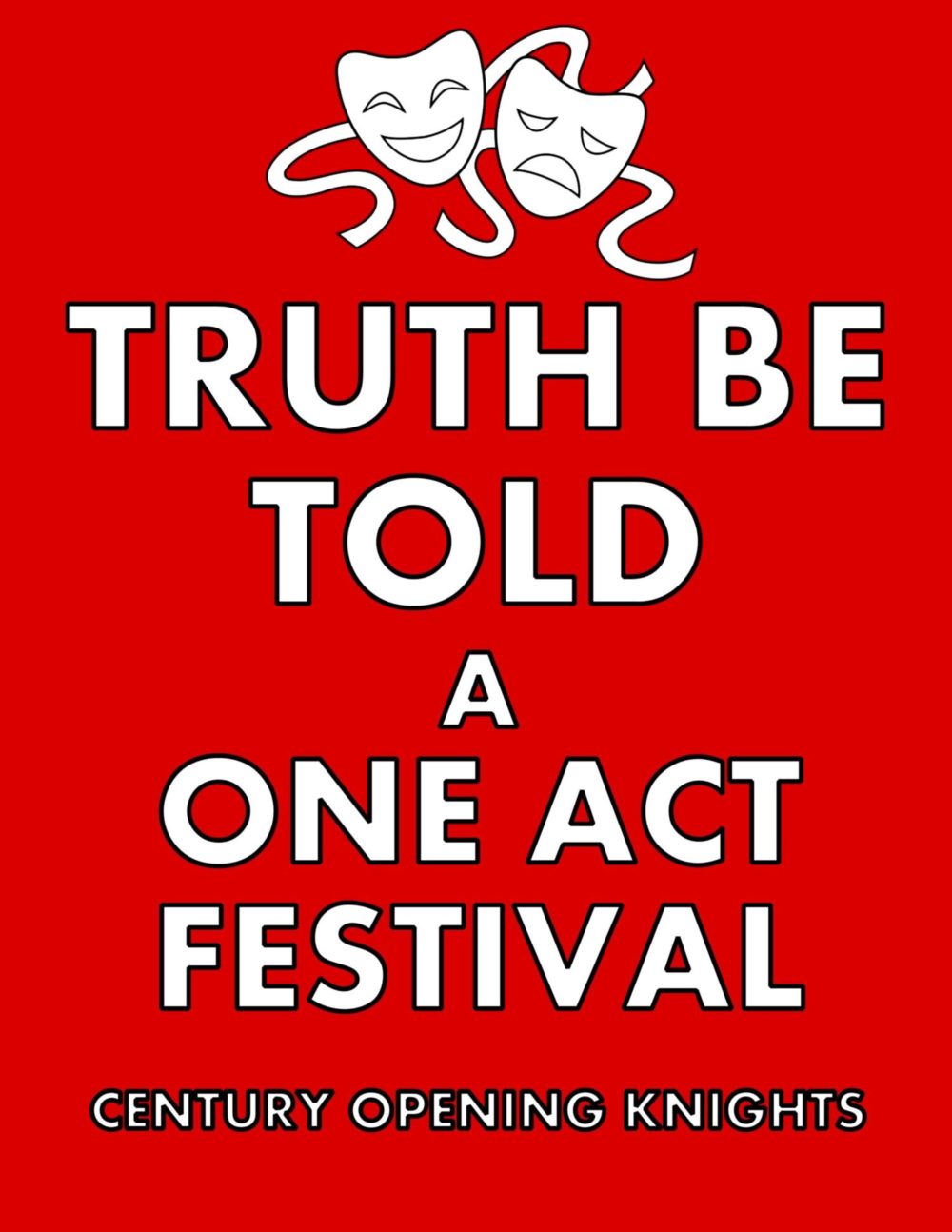 Eldersburg, Maryland – Century High School’s (CHS) award-winning Opening Knights’ Drama Club proudly announces their fall drama production: Truth Be Told: A One-Act Play Festival to be performed at Century High School on November 3, 4, 5, 11 and 12 at 7:00 PM as well as a matinee performance on November 12 at 2:00 PM.

This year’s production will include:

“All Out” by John Rester Zodrow, directed by CHS Senior Delaney Debinski

Synopsis: Welcome to the game show of all game shows- the eager, live action series that will have audience members on the edge of their seats! Four promising contestants will be randomly selected from the studio audience with a chance to win One hundred thousand dollars. Every challenge presented to the contestants will force them to go against their moral standards, and reveal ugly truths about themselves and society today. This enthusiastic and shocking performance will be captivating for all. Would you be willing to go “all out”?

Synopsis: Five spelunkers, Joe, Terry, A.J., Don, and Chris fall down a hole while exploring a cave. After regaing their bearings, the spelunkers soon realize the frightening situation that they’ve been thrust into – trapped within invisible walls created by stone creatures that inhabit the cave. Their only chance to escape is to admit “one absolute truth,” discovering that each failed attempt to be truthful results in the invisible walls shrinking around them. The spelunkers must quickly satiate the stone creatures, or face being crushed to death. Do you dare to Cave Dream with us?

Synopsis: This amazing comedy follows the story of Rapunzel. Told by 2 dueling narrators, audience members will meet a very misunderstood witch, an off-pitch & spoiled Rapunzel, and an unimaginably stupid Prince. Get prepared to laugh as the story of Rapunzel comes alive on the CHS stage.

“That’s Not How I Remember It” by Don Zolidis, directed by CHS Seniors Kristen Herbert and Sarah Noll

Synopsis: Big hair, a gang of thugs, and tubular 80’s music are all necessary parts of this radical 80’s love story; however, when the narrators remember the story differently, audience members will be taken on a major roller coaster ride. Eventually, the narrators do agree on how they met making this production a tale to remember.

Again this year, Mr. Lucas Hewitt is very excited to showcase the talents of the student directors and performers during this one-act play festival. He said, “I am confident audience members will thoroughly enjoy this totally student produced festival and will be impressed by the abundance of talent we have in our Opening Knights’ Drama Club.”

Ticket Information: Tickets are $10. Limited Seating available. Online purchases are recommended by visiting www.centurydrama.com beginning on October 24. Tickets will be sold at the door as well prior to each performance. For additional information, please contact Mr. Hewitt at lahewit@carrollk12.org or (410) 386-4400.